We’re excited to announce extended functionality of Transposit Runbooks and Actions, enabling faster response times and consistent data across all integrations. Our new runbook builder template and added functionality for actions enable teams to automate repeatable tasks at the onset of a runbook as well as group actions together as a single executable operation. We’ve also enabled teams to take output from an action and pass it through as input for another action, ensuring consistency of data across processes.

Teams can now stitch together a set of standalone actions into a group of actions with a singular button to execute them, drastically accelerating incident response times.

When responding to an incident, not every action can be automated, but that doesn’t mean they should be entirely manual. After the initial triage of an incident, teams move into incident coordination, investigation, and mitigation. In these phases, there are many actions that can be performed at the same time, like further escalations, communications to larger groups, SLA awareness, and response urgency. 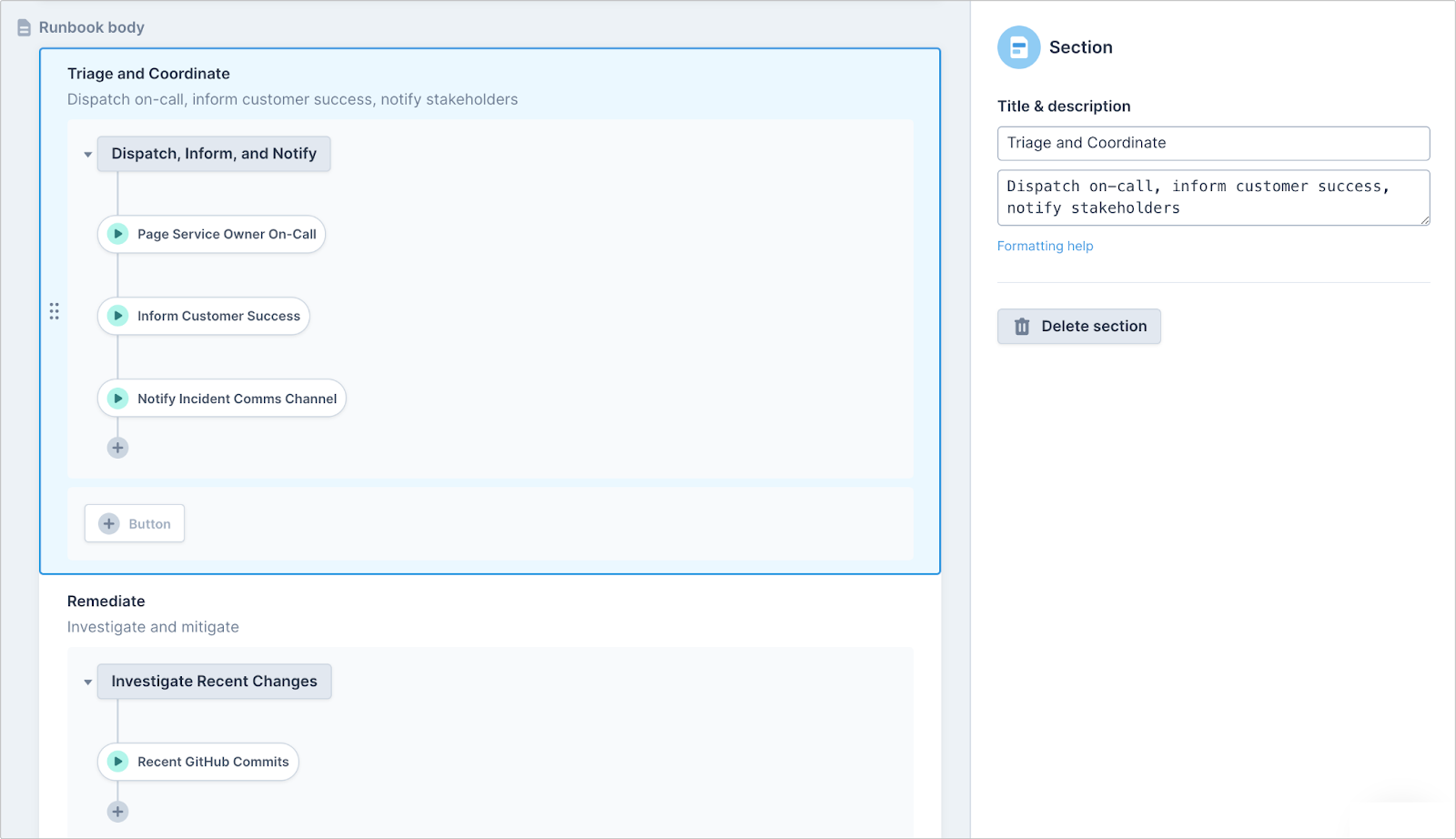 In the example above, a team is dispatching on-call, informing customer success, and notifying their incident communication channel — all executable through a single button in the runbook.

Development and operations teams can now build actions to include output and input data. Users can take the output of one action as the input of another action, creating limitless opportunities for automation. 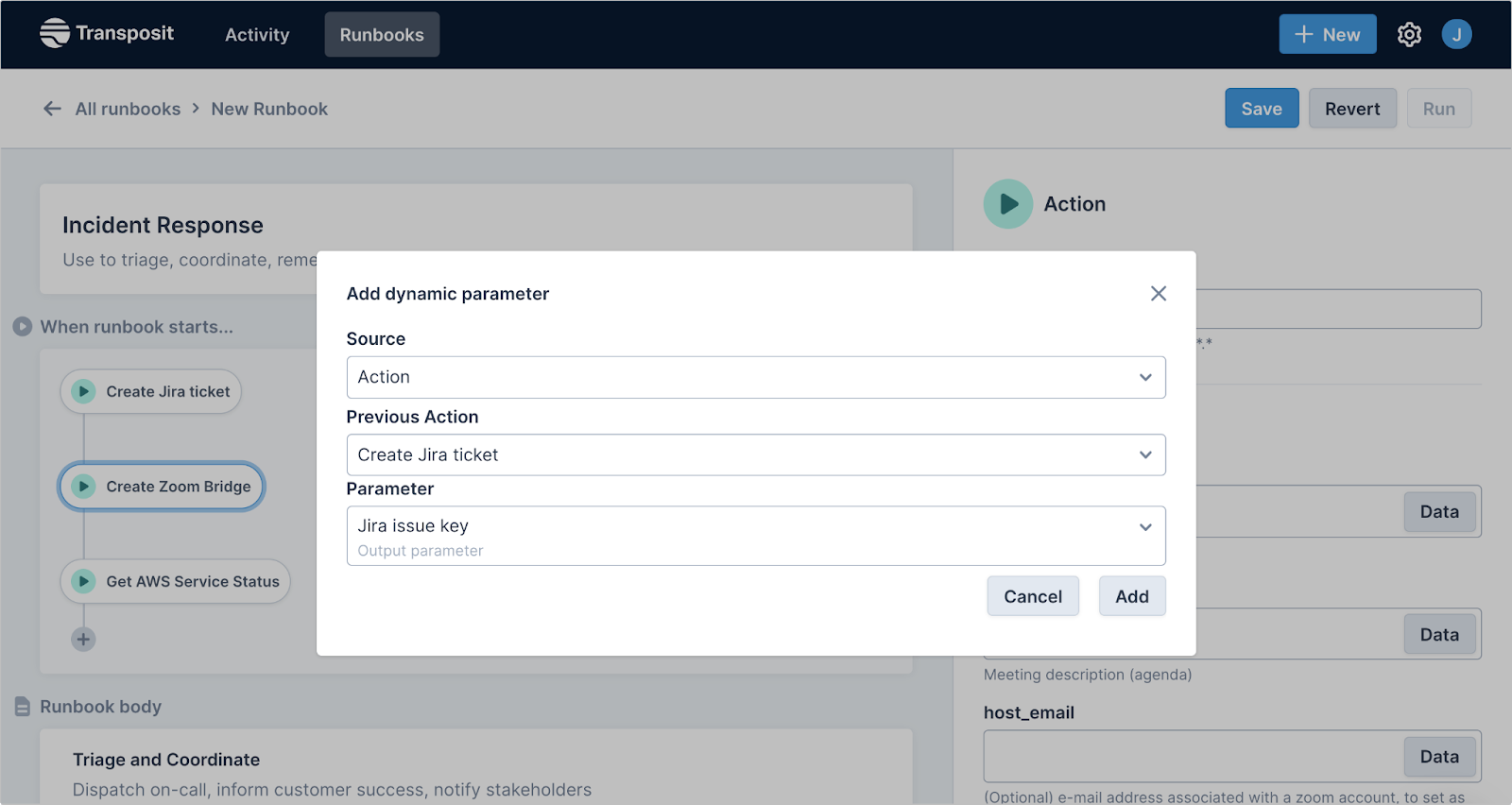 For example, teams can create incident management processes that take the unique Jira issue key to tie together communication channels in Slack and Zoom and to escalate issues to engineers and the operations team, all with the context available in the originating ticket. In doing so, all communication channels created through the runbook use the same incident name.

We’ve revamped our no-code runbook builder to boost the power of human-in-the-loop automation, allowing automation to take on the burden of repetitive actions while also enabling humans to step in and take action more rapidly. The new UI makes it simple to automate predictable tasks that kick off any activity, take action on multiple connected services with a single click, and automate actions to run when a runbook is done or has an error. 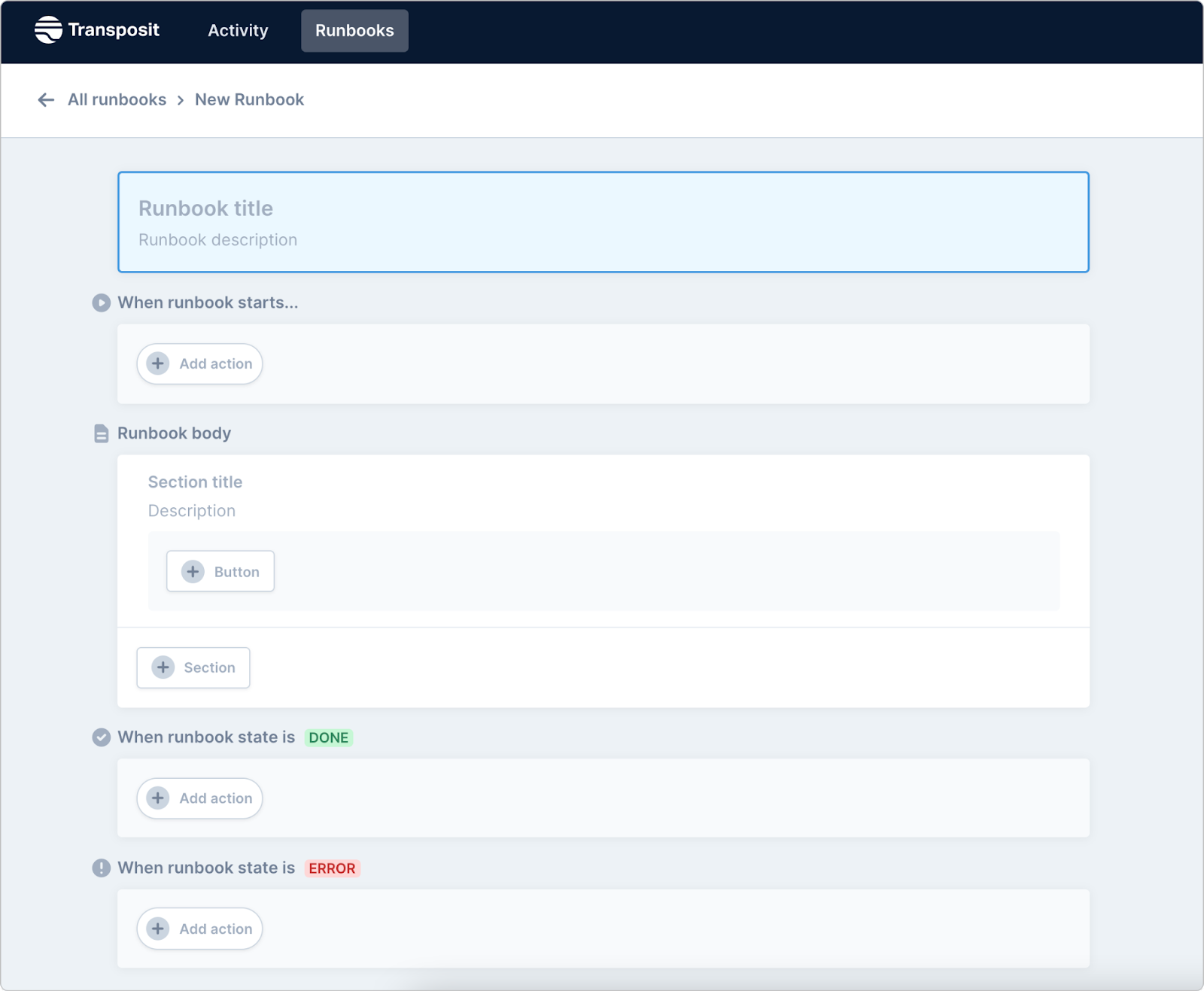 The new template fully automates actions on the onset of a runbook. For instance, every time an incident starts, teams may create a Jira ticket and Zoom bridge and do an AWS service status check. Now, these actions will automatically execute once a runbook is run.

Add one or many sections into the runbook body. Within a section, users can now group actions together for a single executable operation.

When runbook is done or error

Teams may choose to automate actions upon completion of a runbook, like creating an incident report, closing a Slack channel, or adding an update to Statuspage. When an automated action has an error, the runbook state will change to “error” — this ensures teams are aware that something has not run properly and can take corrective action. Teams can create automated actions like notifying the incident commander or restarting a server.

We’re creating new actions every day to create more automated scenarios for our hundreds of connectors. We’ve added new actions with GoToMeeting, GitHub, Google Drive, Octopus, and Airtable that enable teams to do everything from creating GitHub releases and repos, to creating a Google Drive folder, to deploying an Octopus release.

As always, Teams can also create new actions or connectors through our Developer Platform.

Ready to boost automation across both operations and your organization at large? Sign up for VIP Early Access. We’ll reach out to you and give you details about how and when your team can get started on Transposit.