When creating actions, an understanding of how variables work is important and not always immediately obvious. To the right of the editor, the Variables pane is found, as shown below, where the variables available to the file currently open in the editor are defined. 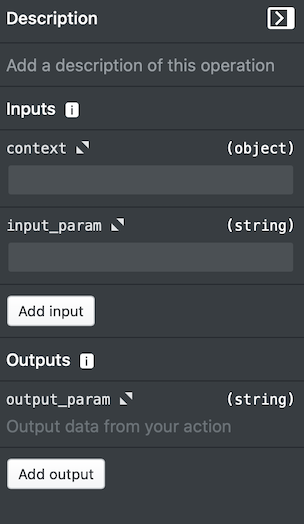 In the Variables pane, you see the Inputs section and the Outputs section, as outlined below.

The following variables are defined in the Inputs section.

During the runbook run, the input parameters outlined above are accessible via the inputs variable, shown below, which you can rename to any name, but is always received in the signature of the operation, from where it can be processed: